Big Red and a Broken Shackle 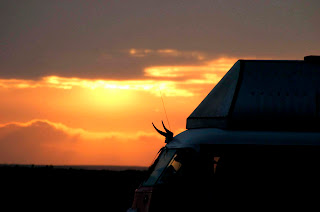 Sunrise and Big Red
Photo By:  Boots McGhee
Topes And a Broken Shackle
Early morning around 4:30 am. It’s a late September morning and I was heading down to Scorpion Bay. The year was 1986-1987 and the town of Maneadera had decided to place a tope, Mexican speed bump, on the north side of town. Unmarked and no sign posted. Fully loaded and doing around 35-40 mph, I hit the tope and BAM! Big Red leaves the ground and I almost hit the ceiling and my dog Boojum is levitating in the air probably thinking, “so this is what it’s like to fly!” Everything in Big Red is upside down and sideways. Big Red’s suspension is real stiff for carrying heavy loads so it doesn’t give much, plus I was driving on a set of bias-ply tires which are similar to rolling on a set of rocks. Basically very stiff.
I didn’t break an axle and Big Red was still rolling so I figured everything was okay. A little later down the road I kept hearing a click and a clack when I would go around a curve. When I pulled over to the side of the road a while later I decided to see what was making the noise. I walked around Big Red for a general look and noticed it was leaning to the left a little. On closer inspection underneath I saw a large hole in the bottom of the truck bed and saw the leaf spring stuck in it. What had happened was when I hit the tope it had snapped the shackle that holds the leaf spring to the frame and the shackle was moving back and forth going around corners making the click clack noise. It was also putting extreme pressure sideways on the other leaf spring on the right side of the truck. If that one would have snapped the whole rear axle of Big Red would leave Big Red.

Well I was a little over 120 miles in to my 800 mile destination and needing to fix the problem. At the time I would always carry oak hardwood from packing pallets for firewood. I decided that in order to continue on, I would have to rig up a way to support the broken section of leaf spring so it would still be able to move freely and not be stuck in the bed of Big Red constantly boring a bigger hole, plus I needed to raise Big Red up to ride more level. So I pulled out a piece of oak and cut it to fit over the hole then jacked up Big Red and wired the oak piece to the shackle and leaf spring so that it could move back and forth without binding. I was determined to continue on and enjoy my trip. I would have to drive slowly and I mean slowly at between 25-35 mph the whole way. I periodically got out to check my handy work and things were holding up good. The only thing was I needed to slow way down around the curves so as not to put too much side pressure on the other suspension parts.

It took another whole day to get to Scorpion but I made it. The drive was good and slow and I got to see a lot of things that I normally wouldn’t have. When I got to Scorpion and made camp I had 2 months there was no rush to fix Big Red. Three weeks later I jacked up Big Red and took off the busted shackle and had Antonio Camacho come out and look at it. He took it to his place and welded it up for me. A week later he brought it out to me and I reinstalled it. He did a great job and it held for another 2 years until I located one and replaced it. ﻿