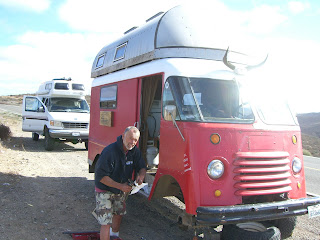 Glen stuck in the middle of Baja
Dec. 2010
I left my camp early afternoon so I could stay out in the desert that afternoon and evening the day before I would normally leave. This way I could enjoy the quiet of the desert night and get a nice early start to make the next day of driving relaxing and enjoying, just taking my time. While leaving my campsite about 20 minutes into my drive I heard an unusual noise but then it went away. About 10 minutes later I heard it again, a slight moaning sound. I stopped to check Big Red out but couldn’t find anything but I was a little suspicious.

The next morning I took off nice and early and Big Red was running just fine until around Santa Catarina then I heard a sound, like a light metal whistling. I really started thinking that something might be wrong with my brakes? Bearings? Or hopefully not my transmission! Just down the road on a curve, there was a wreck and I slowed down and then I heard this ugly groaning with a grinding, then it went away but it turned my stomach for I knew it wasn’t good. So I slowed down and drove in a different gear which seemed to help but I was quite concerned now. Up ahead was a downhill section that when I started down, Big Red made this horrible grinding, groaning, scraping sound and I slowed down and put it in 1st gear and tried to find a place to pull over with a semi on my tail! I had my emergency flashers going so he knew I was in trouble. I finally found a spot and the sound was real bad now and I could feel it through Big Red.

I thought maybe the transmission was out of oil so I checked and it was fine. I backed up a few times and went forward to see if I could make the sound go away. No such luck! So I put it in 1st gear and took off slowly downhill. Fortunately there were no semis coming down and Big Red didn’t make any noises going down for another 20 miles. Then about 30-40 miles from El Rosario I pulled over and this time I knew there would be no more moving Big Red. The sound was enough to make you want to throw up. My stomach just did a few flips when I heard it for the last time.

I got the jack out and jacked Big Red up to see what was up and sure enough I could barely turn the wheel and from the creek and crack and scraping I knew that it was the bearings. When I took the wheel off the parts came falling out and it made my stomach turn. I was done now and stuck in the middle of the hills. 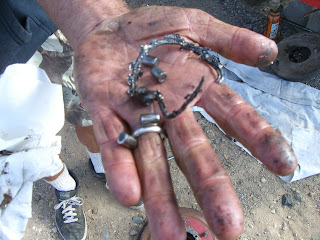 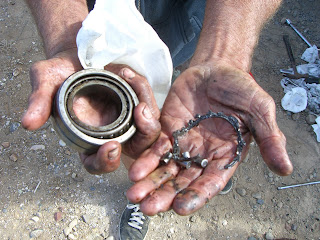 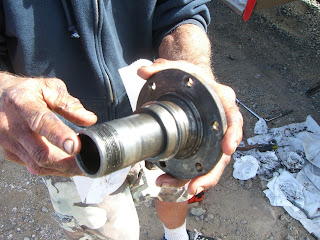 While I was working on it, to my fortune, a friend named Tobin pulls up behind me. First thing he said was did I have a problem. I told him yes and he wanted to know if there was anything he could do to help. Until then I had no idea how I was going to get parts. So we sat down and worked out a plan.

One of the problems was the inner bearings race had gotten so hot that it had seized onto the axle and somehow it would have to either be cut-off or heated off by a welder.  I had to dismantle the right side and take the brake plate off and remove the axle so that Tobin could take the parts into El Rosario and hopefully find someone to remove the seized part from the axle and hope that the auto parts place would have the parts to get back on the road once again. The one set of outside bearings still had the numbers on them so they could hopefully match them at the parts store. So Tobin took off in search of my parts. The one thing we didn’t have was plenty of time. There was about 6 hours of daylight left. It was between 2 storms, the one that just past that morning and the next one would probably hit early the next day. I just had to wait, not knowing how long Tobin might be gone. I thought there was a possibility that he might not be back until the next day? I realized then that we could have had him send a message back with someone coming this way or if he ran out of time maybe he could send the parts back with someone to drop them off. I didn’t need a mechanic to come out, I just needed the parts and I wasn’t about to leave Big Red unguarded. I would stay until something positive happened.

The funny thing about this is I had told myself before I left home on this trip that when I get back I was going to take off all the brakes and bearings and replace the brakes and check my bearings. So here I was sitting on the side of the road wishing I had done it before I had left. The most ironic thing about this whole ordeal is at my shop in San Diego, I had saved an old set of wheel bearings from my 1963 Dodge Power Wagon. They had been sitting on a shelf for the past 30 years. Right before this trip I had picked them up and wondered if by chance if they could possibly fit Big Red. I carry all spare parts for Big Red but thought to myself, why should I carry something I’m not sure if they even fit. The crazy thing is that I hadn’t touched those bearings in 15 years and then it was just to move them. 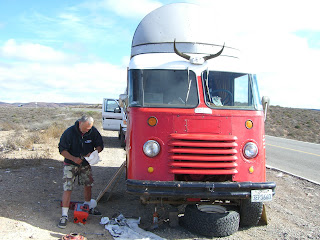 So back to my situation on the side of the road. I had been hanging out now for close to 6 hours, looking at the corner of the road which comes from the north, the direction Tobin had left with my parts. Every time a vehicle was coming I looked up to see if it might be him. I was getting concerned, it was about 50 minutes from being dark. Then I heard a vehicle. I looked up and there was Tobin coming around the corner. He pulls up behind me and I raise my arms in victory but when Tobin gets out he looks bummed. He says to me; “Hey Glen, sorry but we couldn’t find the parts.” Then he smiles and says, “just kidding man!” Wowa!  I was a little bummed at first but now we had the parts and I went to work fast. Tobin said he went to the parts place in El Rosario and they didn’t have the parts so they called up to San Quintin and they had 3 of the 4 parts I needed. So he drove to San Quintin and back to help me out.

One thing here I want to make sure is brought to light is that this was way beyond a normal favor. For one thing Tobin was on his way home to Northern California and then had to drive to Canada for a wedding. He could have left me there and said that he didn’t have the time to help me out, or he could have just waved and honked when he saw me and not even have stopped to see if I needed help. Not Tobin. No Tobin is made of the kind of stuff you don’t find much in people anymore. He truly is a man of true friendship, the kind of friend that nothing stands in his way to help someone, even if it means driving 6 hours and a 100 miles out of his way, and that is exactly what he did for me. Plus he would not leave me there. He stayed and made sure Big Red was rolling once again and safely.
﻿ 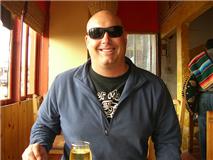 Tobin
It took me about 45 minutes to put Big Red back together again and get it rolling. We had just gotten out from my roadside hell as it was getting dark. I told him that it was fine and to go ahead but he insisted on driving behind me to make sure everything was ok.  We drove for another 3 hours until just past San Quintin where we both pulled into a camping area and spent the night.

The next day it started to rain and it continued for 3 days. Had Tobin not stopped to see if I was ok, I might have been there on the side of the road for a week. When we got to the camp area I paid Tobin for the parts, his gas and a little extra for his generous help. I also said to him that I was going to make him a new surfboard for saving my tail. 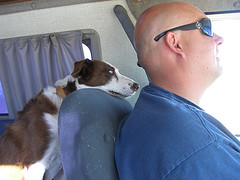 Tobin and his dog Sadie
Posted by Glen and Roberta Horn at 6:45 PM