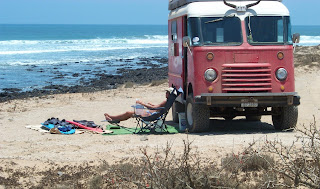 Roberta relaxing after a fun surf session
﻿Picture being camped at Scorpion Bay in the days before the houses appeared out at the vacant points of 3rd, 4th, 5th and beyond. It’s hot, the waves have been fun and it is in the middle of the day in July. We had just gotten out of the water and Roberta and I were baking in the sun. We got to talking about food and something cool to drink, then the conversation continued into desserts. We fantasized with the possibility of how some cold ice cream would taste. Then we started joking about how cool it would be if an ice cream truck would come by and the reality of it was next to finding a gold bar while driving a tent stake into this hard ground.
Now this is the honest truth and one of those things that never happened again in all the years of camping there. About 20 minutes later we heard what sounded like the funky melody music of an ice cream truck! Both Roberta and myself sat up and looked towards the sound and holy crap here comes an ice cream truck, ding-a-linging down a cactus road towards our campsite. We both looked at each other and started busting up laughing. I said, “Who rubbed the magic vase?!” When the truck got close we flagged him to stop and bought some nice cold ice cream, then he was on his merry ding-a-ling way.

We sort of expected him to disappear like a dream into a cloud or something or maybe a cactus but he just kept driving away until he was over the rise and the melody just faded away. And there we were left standing on that hot sunny day on a desert point, with 2 cold ice creams in our hands smiling. 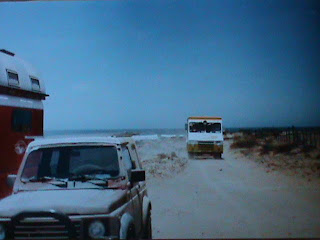 Ice cream truck from out of nowhere! 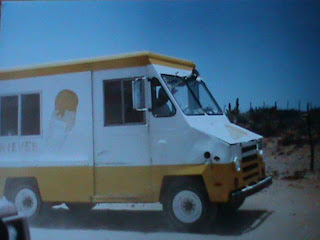