When I Run In The Wild 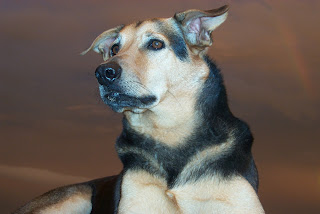 When I run in the wild, almost anything can happen at any time.  Here is one of my experiences.

I was out for a morning run, my dog Apollo running along with me thru the dirt and rocky trails in Baja.  The air was cool, the clouds were thick and the breeze was refreshing.  Apollo was having a great time running up and down hills, in and out of the ocean, stopping to sniff this and that.  Nothing unusual about the run, just another beautiful morning in Baja.

As I was nearing a grade to run uphill, from out of nowhere a coyote suddenly appeared, running towards me.  I yelled “Apollo, Apollo!” and froze in my tracks.  I have seen many coyotes on my runs but have never had one run towards me.  There were many rocks around me to throw at it should the need arise but Apollo would have none of that because as I yelled his name he came running from over a hill.  His hackles were high and his teeth were showing and his bark was vicious.  He came straight towards that coyote and the chase was on, with the coyote running for his life!  But Apollo was hot on his heals.  Over the hill they flew with me running to watch my 11 year old dog, take control and protect me, his mama!

They ran and ran and all you could really see was the dirt flying as they sped away.  They ran over hills and into a valley and then suddenly Apollo had him!  I stopped and watched as they clashed their bodies together, up into the air, dirt and dust flying.  My heart was pounding out of my chest.  There was so much dust in the air from the fight that was taking place that I couldn’t see my Apollo anymore.  I prayed he was ok and then gathered my voice and called out his name.  A few seconds passed and there he was, running right to me!  His hackles were up, he was panting and breathing hard, but his tail was wagging.  He came to me and leaned into my legs looking at me and looking out into the desert making sure I was safe.  I kneeled down and held him in my arms, thanking him for protecting me.  He stood there so proud, then turned and looked at me and licked my face, something he rarely does. Tears came to my eyes as we shared a moment in time together that will remain in my heart forever.