Hitchhikers and a Broken Clutch Cable 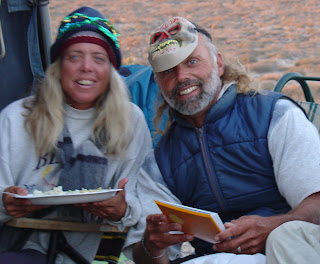 We stopped in to get gas at San Ignacio after traveling 120 miles on a dusty dirt road. Along the way we saw 2 German bicyclists needing a ride north. They weren’t looking so good so we offered them a ride. About 40 minutes down the road we pulled over to take a leak. When we all got back in I started Big Red and pushed on the clutch and then BAM! The pedal went straight to the floor and didn’t come up. I knew the clutch cable must be the problem, it probably snapped.

The two Germans wondered what happened and I told them they had just gotten a ride in a 1955 Chevy Step Van that broke down and we were going to be here awhile, but no worries.  It would all be fine.  They looked a little concerned as they looked around and saw that there was not a building in site! I could just imagine what they were thinking; Oh My God!  What kind of a ride did we get ourselves into?   I got out and under Big Red to see what the problem was and sure enough the clutch cable was hanging down, only it wasn’t the clutch itself that broke but a part that the cable connects to. The Germans asked if there would be a place to get the part in the next town and I told them there is no next town for a long ways. The part that broke no one would carry and that I would have to improvise by making the part while they waited.  They had no choice but to sit back and watch.

So I took out the passenger seat and set it on the side of the road next to Big Red and took off the engine cover so I could get to the problem easier. The Germans looked curious and entertained and were taking pictures while Roberta sat relaxed in the chair on the roadside reading a book. I set my to mind to work trying to come up with something that I might have in Big Red parts and pieces surplus to make a part. I came up with the idea of using part of my tow chain. I cut two links off and managed to improvise them into a working swivel mechanism.
Now the Germans were getting a kick out of watching me fix Big Red. Roberta knew it would be ok. She had been traveling with me in Baja long enough to know that anything can happen. We seem to have quite a few interesting breakdowns, which for us keeps the challenge of traveling thru Baja fun.  One of the things that Roberta likes to do during all these happenings is to time how long it takes me to get us back on the road again.  Not that we are in a hurry, its just a fun thing to keep track of.  By the time an hour was up I had the part installed and Big Red was back together and we were on our way. 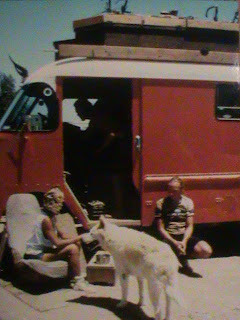