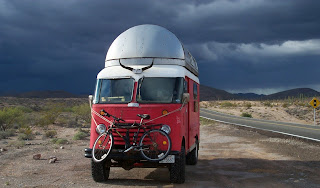 I’ve been traveling in Baja since the mid 60’s. Throughout those years having various vehicles and in search of what I thought would be the perfect rig. One day in the mid 80’s, I was walking down Mission Blvd, just a short distance from my surf shop. Just then I heard the sound of a healthy engine passing by. I looked and saw the perfect rig going down the road. My imagination began to go wild with the idea of owning that rig and what I could do to it and where I could go with it.  Anywhere in Baja is where it should be roaming. Little did I know that someday I would own that very same vehicle.
Two months later I had heard that the person that owned the rig was someone I knew and they were wanting to sell it. A month later I heard it was still for sale and he couldn’t get it to start. I decided to track the guy down and make him an offer. I finally caught up with the guy and he told me that he wanted to sell it soon so he could go to Hawaii. So I made him an offer of $1,000. He said ok and we made a deal. I towed it home and went through it and got it to start and made sure there was nothing seriously wrong with it. A month later I went to the DMV and registered it. The very next day another guy I knew came by my house and told me it was his vehicle and that the other guy had stolen it from him. I told him that the other guy had the pink slip and signed it over to me and the DMV was fine with everything and gave me the tags and registration. I told him he should see what the DMV has to say, but as far as I was concerned it was mine now.  Never heard anything else about it.
Posted by Glen and Roberta Horn at 10:40 AM