Over The Edge On A Muddy Road 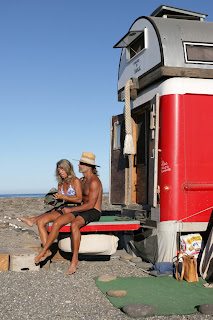 Hanging out in Baja
﻿
Over The Edge On A Muddy Road
It was January of 2002 and we were in Scorpion Bay. It had been drizzling for the past 2 days. Roberta and I had decided to head back up to the upper mid part of Baja. Seeing as how the roads were wet and muddy I decided the north road might be too slick and possibly impassible. I decided to go the south road.
We were coming to an area where the road has dirt that looks like asphalt and when it is wet a car will act as if it is on ice, no control, no traction. Braking does nothing because the treads are full of sticky mud and your vehicle will just slide down the road. I was traveling slow coming up to this area which is well known for vehicles spinning out of control and sliding over the edge of the embankment into the river bottom. I slowed down to 15 mph and was telling Roberta about this area. We had just entered the slick area when we started to drift slowly out of control. Oh s**t!!! I said, “No, I don’t believe it!” We were sliding down the road sideways out of control. At 15 mph things don’t happen quickly, it was all in slow motion, we were sliding towards the edge of the embankment.
There is a slight drop off into the soft riverbed mud. Unfortunately I hadn’t put Big Red in 4 wheel drive so we were at the mercy of what was to happen. It was a real odd feeling heading over the edge just sort of oozing our way over and down. Had I been in 4 wheel drive this wouldn’t have happened for I’ve driven through this stretch of road many times before in wet situations and never had troubles. It just happened to slip my mind and now we were paying for it. So as Big Red is sliding over we start to lean at a severe angle. So much it feels as though we might roll over on our side. Roberta is now below the level of my seat and still in the passenger seat. She is leaning against the passenger door with her right arm. Big Red is still moving and slowly inching its way into the mud. I lean over and turn the propane refrigerator off so there is no flame. Both of us are leaning towards the left side.I decide that after Big Red has stopped moving that it is stable enough to try and get out without causing it to slide anymore. So Roberta grabs my hand and I pull her up and out the drivers side door. Big Red’s left wheels are on the road and the right wheels are over the side. We took a look at how badly we were leaning. It looked as though I could push it over with my hands. Our new dog Apollo who was just 4 ½ months old had jumped out of Big Red and was hiding in a bush. He didn’t want anything to do with being in that vehicle. In fact he was probably wishing he was back in San Juanico, rather than with these crazy gringos.
I started preparing the area on the downhill side of Big Red’s wheels so we could try and move to a more stable location and level up the vehicle just a little so that is wasn’t leaning so drastically. Roberta started searching and gathering anything that might be of use to put in front of the wheels for traction. I was making a track for the wheels to roll on once we got the soil and mud stabilized with whatever Roberta could find.
Out of the blue I decided I wanted to get a picture of our situation. The only problem was, the camera was up in the second story bedroom. That meant going back in Big Red and putting my weight up high which could possibly cause it to roll over. I decided to take the chance, I wanted that picture. 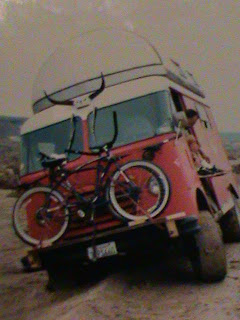 I was leaning as far to the drivers seat as I could. I got my head up high enough to locate the camera. I swore that every move I made it might be the one to cause Big Red to roll. I reached the camera and slowly backed down and out. After the picture was taken it was time to get back to getting out of the mess we were in.
I kept an eye on the wheels to see if Big Red was inching its way over in the mud. If it did it might roll on it’s side. If so I’d have to be quick and duck under Big Reds frame and let it roll over me without squashing me. After about 20 minutes of this I needed to go up to the road and begin digging a track in the road. I got out my digging bar and went to work. I was in a race against time. It was drizzling harder and I needed to get us out soon before it got much worse. I got a good trench going in front of both wheels on the upside of Big Red. I dug a few diagonal slots in for traction. If it began raining any harder and the road and mud got any more saturated Big Red would surely start to slide. If we could get Rig Red level and more stable I’d felt we had a good chance to get out.

Shortly thereafter we heard the sound of a truck coming towards us. It was moving a little to fast.  Roberta came up on the road waving her arms for him to slow down abit. As he got closer I could see that he was compensating for the mud to keep from sliding. He started to drift and he got within 50 feet from us. He was off the crown of the road just enough and started sliding directly at Big Red! Fortunately it came to a stop about 10 feet from us. It was our friend Antonio and his vegetable truck. He got out and came over in his good clothes and boots. His first words were, ”muey malo!” I nodded and said, “si!” He gave some advice and wanted to help. I said thanks but that I’d be able to take care of things. Plus I was already up to my elbows in mud. He gave us a few oranges and said adios.
By now an hour had already passed. After another 15 minutes here came another car. This one was moving way too fast. Roberta was waving her arms but they weren’t paying any attention to her waving and weren’t slowing down. They were doing around 25 mph when they started sliding sideways and about 60 feet away from us. The nose of their car was facing us. Miraculously the car stayed on the crown of the road as it slid by. There were 4 drunken Mexicans in it. They had this look on their faces of complete saturation and awe. The driver has a glazed look on his face. We watched them slide by completely out of control. They slide for another 60 feet or more and then somehow got lucky and that car straightened out and kept on going. It probably didn’t even faze them if they even knew what happened. Roberta and I looked at each other and began laughing. It could have been a different outcome but we were glad for the short bit of entertainment at that point of our situation.
I went back to work and laid down enough rocks, branches and a piece of tin metal about 24”x36” which I placed on top of the rocks and branches so they wouldn’t separate in the mud. I was hoping I could move Big Red forward about 18 inches. I gently got in and started the engine. I put it in 4 wheel drive and compound granny 1st gear, and slowly let out the clutch. If this didn’t work we might slip some more and roll. 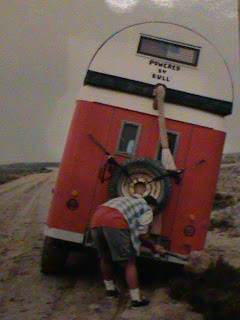 Big Red slowly started moving forward and began to creep up on the track I had made. It came up the extra 3 inches that I needed so the angle wasn’t so severe. It had been 2 hours and that little bit of security was all we needed. I was pretty confident we would be out soon. After another half hour I was ready to take Big Red up and back on the road. Once we were back on the road and ready to continue we looked for Apollo. He was still hiding under a bush, probably hoping we couldn’t find him so he could high tail it back to San Juanico. It wasn’t his lucky day though. We put him in Big Red and we were off. None to soon for it began to pour less than 20 minutes later and it didn’t stop for 2 days.

Posted by Glen and Roberta Horn at 12:18 PM No comments: 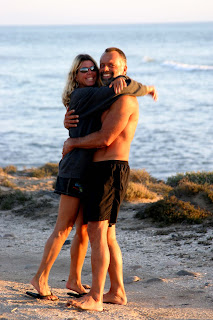 Glen and Roberta in Baja
Hi!  This is our first blog!  My name is Roberta Horn.  My husband Glen and I thought it would be fun to share our Baja adventures with you.  Glen has been surfing and traveling different areas of Baja for over 40 years and has some pretty amazing stuff to share.  I have been along for the ride for 13 years now and have certainly gone thru some interesting adventures with him.

We spend 8 1/2 months out of each year in Baja, camping and surfing.  We travel in a 1955 Chevy StepVan which Glen converted into the funnest surf rig around.  It has storage for supplies for up to 6 months and we can carry 12 surfboards with us.  Our rig is named "Big Red", also fondly known as "El Toro Rojo Grande".  It has a set of Texas Longhorn horns on the front and in the rear, there are a set of real bulls balls!  Yep, they are real.  A mexican friend of ours in Baja said we needed a "real" set!  So one day he appeared at our camp with just that.  A real set of bull's balls!  We have a Samurai, named "El Toro Chico" that we tow and use for exploring. 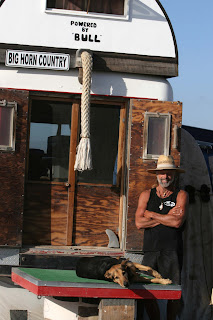 We have 2 really cool dogs, Apollo and Taxi. 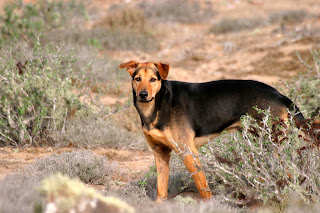 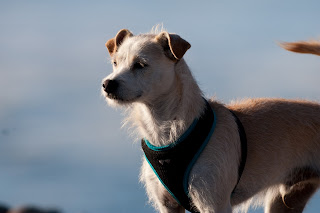 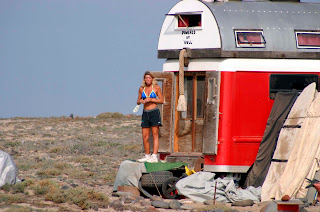 Roberta at camp
Posted by Glen and Roberta Horn at 1:44 PM 3 comments: