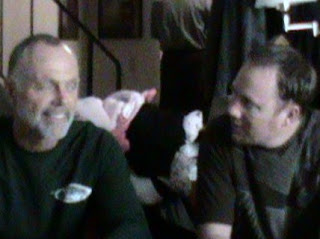 Glen and his newphew Mark
One time in March I was taking my nephew, Mark, down to Baja for his very first Baja adventure with high hopes of great surf and fishing. The day before the trip I replaced the fan belt. We were just outside of El Socorro on the south side, just before heading into the hills to El Rosario when all of a sudden a loud crash-bang came from the front of the engine. My nephew saw something fly from under Big Red and over the side of the road into the bushes. My nephew said to me that it looked like an alternator to him. I immediately shut the engine off and to my luck there was a place to pull off the side of the road. I jumped out and looked underneath Big Red where the alternator was supposed to be and sure enough it was gone, so I asked my nephew to show me where he saw it go. We walked back about 75 yards and found it easily enough.

At the time this all took place it was about 4 hours before dark and it looked as though it could rain, so I needed to get to work fast. In all, it took about 3 hours and a lot of brain storming. I had to take off the grill, empty the radiator fluid into a bucket so I could reuse it, take out the radiator so I could get to the problem area where the bolt that held the alternator had sheered off at the engine block. Fortunately I had just loosened that bolt the day before to put on the new fan belt because it allowed me to take a screwdriver and back out the piece of bolt that was in the engine block. The other part of the bolt with the head on it was still with the alternator. I got real lucky here because there were still about 5 threads on the bolt still showing. The problem here was it also was broken at the same thickness of the alternator.

The first thing I did was look in my supply of nuts and bolts to see if I had any that would replace it and I didn’t. So the next thing I did was look at the frame and engine to see if I could rob one from somewhere else on Big Red, no such luck. The only idea I could come up with was I needed to cut some of the  alternator away where the bolt went through and threaded into the engine block. I needed to get those 5 threads of bolt to hold the alternator in place. So I took out my hacksaw and cut about a half of an inch off the ear of the alternator. The fan belt would no longer line up but it should work for another 600-700 miles. I wanted to make sure my nephew could still have his first Baja adventure and it was already turning into something neither of us had in mind.

After installing the alternator and belt I needed a way to keep the fan belt tight. I didn’t want to put too much pressure on those 5 delicate threads so I cut a wedge out of a piece of wood and put it between the engine and the alternator to tighten the fan belt and it worked beautifully. So long as it lasted the rest of the trip down and back I could fix it when I got home. My other concern was it was starting to look more and more like rain so I needed to get Big Red back together and get to someplace good to pull over for the night before it got dark. Where we were stuck at was not a good place at night. It was known for robberies. I didn’t tell my nephew that! I got Big Red back together just as it started to drizzle and we started it up and pulled onto the main road and we were off again.﻿