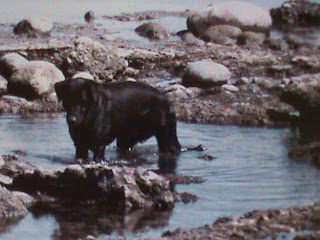 Rocky hanging out in a cool tidepool
Back in 1974, Bill Minard, my girlfriend Linda at the time, my dog, a lab named Rocky and myself were lazing in a nice waist deep tide pool in Abreojos. It was a really hot day, where all you wanted to do was just lay by someplace cool. So that’s what we were doing. While we were enjoying it and watching my dog Rocky, who was black and really loving the cool water, pawing his way around the tide pool he suddenly jumped back which jolted all of us with some excitement as to what the X?!# was that? Then as we jumped out of the water we settled down and took a good look as to what made him jump.

Down by his paws there was a big purple and blue crab with some very intimidating set of pinture claws. Then the crab started moving into shallower water and Rocky and him had a face off! Rocky was barking and the crab stood there with claws ready to draw blood. We let the face off go on for a few minutes then I pulled Rocky back and gave the crab a chance to escape to the safety of the rocks. 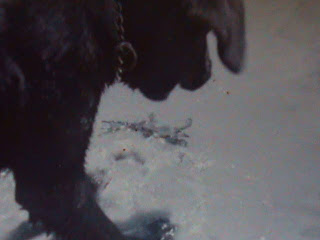 Rocky checking out the crab
We then realized we were surrounded by tentacles coming out from all the holes and deep cracks in the submerged rocks. At the other end of those tentacles or feelers were lobsters! To our surprise we had been sitting in this tide pool surrounded by dozens of lobsters!

So Bill and I began laughing and started pulling out lobsters by the hand full! There must have been 20 to 30 nice sized lobsters so we picked about 6 and took them to camp and boiled then up and had a grand feast. How much easier could it get? That only happened the one time and never again.
Posted by Glen and Roberta Horn at 4:28 PM